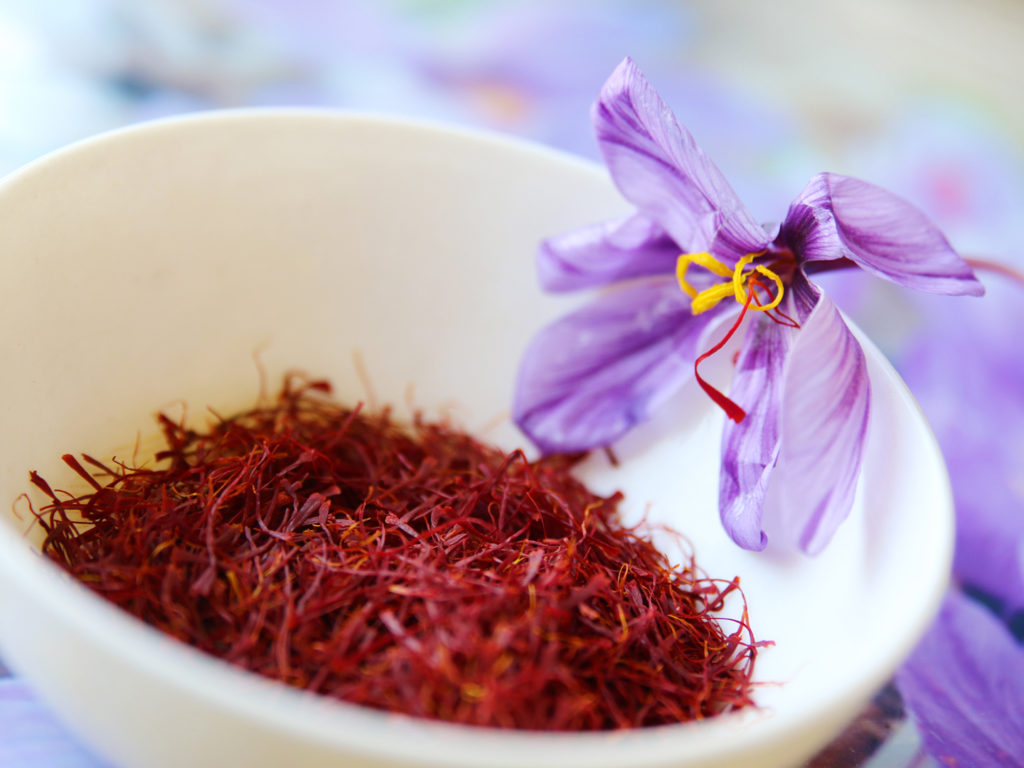 Known for its bright yellow color, subtle flavor and expensive price tag, this spice comes from the saffron crocus flower (Crocus sativus). When dried, stigmas of the flowers are collected to create the spice. Native to Greece and Southwest Asia, saffron is now grown in North Africa and North America. Iran accounts for most of the world’s saffron production today.

Retailing for $500 to $3,000 per ounce, saffron is by far the most expensive common spice available, which is due to the labor required for production. Only five to seven pounds can be procured from each acre of land. Luckily, a small amount of saffron goes a long way – recipes often call for just a gram (1/28 of an ounce).  But its price tag is not the only thing rich about saffron: the spice offers a vibrantly deep-yellow hue to foods, and imparts a complex flavor that’s nearly impossible to categorize: it has been described as everything from grassy and briny to sweet and bitter.

There are different varieties of saffron, including Kashmir Mogra cream Indian, which is dark red in color; Aquila, which is considered by many the best saffron in the world; Spanish coupé, which is the highest grade of Spanish saffron; and Spanish superior, the most widely available saffron.

Historically, saffron has been used not just as a flavoring for food, but also as a personal care product. In the ancient baths and public halls of Imperial Rome, it was used as an aromatic as well as a coloring for women’s hair. As a medicinal spice, saffron served as an antidepressant in traditional Mediterranean cultures, most likely due to its carotenoid constituents. Orally, it has been used to treat asthma, cancer, insomnia, respiratory concerns, and as an aphrodisiac. Topically, saffron even has a history of use for alopecia.

Nutritionally, saffron contains vitamin B1 and vitamin B2, phytochemicals and essential oils, although typically consumed amounts are so small that these nutrients don’t contribute significantly to daily nutrient intake.

Dr. Weil’s take:
For culinary use, saffron is usually associated with curry, paella and bouillabaisse. Many rice dishes around the world use saffron, from Spanish yellow rice to Italian and Swiss risottos. It is also used in beverages, including a centuries-old Middle-Eastern drink at nighttime that features saffron in warm milk. A Swiss aperitif uses its own cultivated variety, called Mund. Saffron is also featured in desserts and sweets, including ice cream, puddings, breads and pastries.

Always use fresh saffron. It is more expensive, but a very small amount is all you need for most recipes. The taste of fresh saffron is much better than that of the powdered form, which is often cut with other spices. Look for saffron that is bright in color, as this indicates high quality. Store saffron away from light and heat in a tightly sealed container for up to six months.

Saffron is a tasty addition to rice, lentil and chicken dishes, in paella and soups, or even added to desserts for a unique taste.